Wireless technology seems like a great idea, the problem is we aren't electrically compatible. Our 60 Hz electrical grid in North America functions with appliances, equipment or devices that operate at 60 Hz. If they didn't the equipment wouldn't run efficiently or safely.

Smart Meters, cellphones and Wi-Fi use frequencies that are 900 MHz to 5 GHz. That is 900 million cycles per second to 5 billion cycles per second. Towers, their antennas, routers and other wireless infrastructure are bathing areas so we can use wireless. The real problem is there are reasons we wire devices because nothing in existence runs at those frequencies. Safety Code 6 in Canada uses the same science standards as the FCC but admits the mechanisms were missing linking the frequencies to adverse health effects. They left out the millions or trillions of frequencies of biological systems as well as the routers and antennas hitting all life. The frequencies are illegal as applied. Safety standards only considered tissue was heating, they left out the fact intricate electrical systems are electromagnetically induced. Ohm's law wasn't considered or used and it wasn't understood cell voltages in your body are changed.

Volts = amps x resistance (V = I x R) Power (watts) = volts X amps. If you look at a spec plate on an appliance in your home, you can determine how many watts the appliance in your home uses. A cell in your body has -70 mV and that voltage will change but none of that information was used when it comes to safety.

The information below is critically important to you. You will read that authors radiated chicken eggs with frequencies and the chicks were mutated as you can see in the pictures.

A smart meter will go on your home and the meters, relays, routers, collectors will radiate a fetus, a baby, a baby girl's eggs 24/7. Chickens hatch in 21 days and the chicks were mutated, girls' eggs will be radiated for years until they become of age to be able to get pregnant. When they get pregnant, if they get pregnant, what will happen to the baby? All of this to read energy consumption remotely and this isn't addressing the problems to buildings, infrastructure, agriculture, fish, trees and literally everything in the coverage area.

Here is a picture from a must read book called "Cellular Radiation, Is This our Next Titanic?" by Dr. David R. James & Ora James Murphy. Ph: 1-877-300-4880 Ext 102. Look at the picture and think of your children or wives as well as all life. After mutation, what happens when a species can't reproduce anymore? 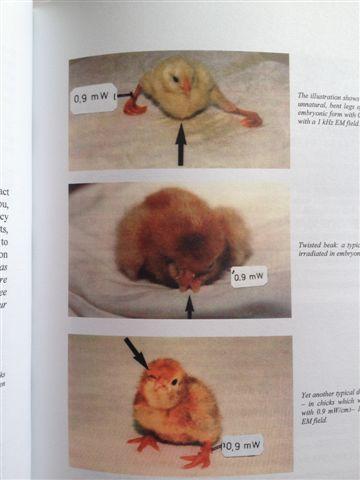 Cellular Radiation: Is This Our Next Titanic?

Ora Murphy’s involvement with the international entertainment industry spans a total of 42 out of her 53 years. In addition to this distinguished career, she is a seasoned linguist, (simultaneous) translator, translator of scientific literature, and a writer (along with her late husband, Dr. David R. James, Ora co-authored their highly acclaimed book, A Handy Way to Cook Your Brain, which talks about esmog related issues, among other things). Having successfully operated her Europe and US-based businesses, over the last decade, Ora’s extensive experience in sales and marketing make her our first choice to spearhead eSmog-Responders™, International.

Cellular Radiation: Is This Our Next Titanic?

Largely based on the highly acclaimed book, A Handy Way to Cook Your Brain - What's the damage? by the late Dr. David James and Ora James, the current publication, Cellular Radiation: Is This Our Next Titanic? takes a hard look at the potential health risks caused by mobile phone transmissions, WiFi, microwaves, wireless technology - and electrosmog (esmog), a term directly linked to today's prevalent cell telephony/wireless technology. While having been widely used throughout esmog-aware Europe, for the last 15 years, the term esmog is only now beginning to be recognized in the US. Cellular Radiation also addresses the alarming rise in electro-hypersensitivity (EHS) in humans which is rapidly spreading throughout the world. Reviewed by internationally acclaimed authorities in the healthcare sector, Ora James Murphy abridged the original, condensing its updated contents. Carefully researched and designed to create awareness and provide hands-on facts and evidence, Cellular Radiation makes for an easy, non-scientific read, geared for the broad public to be introduced to the new and very real commodity called esmog.

Dianne Knight is a participant in the Amazon Services LLC Associates Program, an affiliate advertising program
designed to provide a means for sites to earn advertising fees by advertising and linking to amazon.ca and amazon.com.